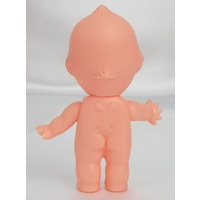 Make 4 interest-free payments of $2.24 fortnightly and receive your order now.

Kewpie is a brand of dolls that date back to the early 1900's and the early versions have since become highly collectable.Their name, in fact is derived from "Cupid", the Roman god. Conceived as comic strip charactors by cartoonist Rosie O'Neill, the idea for the sweet little dolls come to her in a dream. She discribes the dolls as "a sort of little round fairy whose one idea is to teach people to be merry and kind at the same time."

These soft vinyl dolls are still popular today with boys, girls and adults. Use in shadow boxes, cake toppers or in party favour bags.

This Kewpie dolls is 10cm and has movable arms and head.

Warning- Small parts are a choking hazard and should not be given to children under 3 years of age.